State of the Blog

I’m sure you’ve noticed that things have slowed down around here…the thing is, I’m in a big push to get a good chunk of my novel ready for review with a prospective publisher after the first of the year. Combine that with the holidays and amazon sales eating up a chunk of my free time and I just don’t have enough time to dedicate to the blog at the moment. My hope is to start up again regularly after the first of the year, but we’ll see how that goes; I’ve wanted to be a novelist since I was 11, and now that I have a real chance at doing it, I need to seize it. Priorities, you know?

In the meantime, I hope that everyone has an awesome holiday season and I see you again in the new year!

A Word on My Silence

Hey all, I’m still around, just incredibly sick. I’m excited to get back to the blog once I feel better, though. In the meantime I’m reading everyone else’s blogs when I can.

That Giants-Braves series was just insane, and last night was quite the capper. I’m like Mulder when it comes to the Giants-Phillies series…I WANT to believe, but I’m having a hard time of it, especially after the showing against the Braves. That anemic offense isn’t going to cut it when you’re facing the Phillies offense, no matter how good your pitching is. We’ll see…I definitely want them to win, but it’s going to be a tough one.

I’ve written about my storage space issue before, but I think I’m coming around to the conclusion that I can’t really continue to store thousands of cards unrelated to my core collections. This also means that continuing to buy wax is kind of out of the question. When I really think about it, would I rather spend 20 dollars on a blaster that may contain crap, or 20 dollars on a couple of cards that I really want? I mean, don’t get me wrong, the lure will always be there, and I get why busting wax is awesome, but I think it’s time to get more focused here, especially with other, bigger priorities on the horizon.

Apropos of nothing, I’m finding gluten-free living to really agree with me. Makes me wonder if a lot of the physical ailments that I’ve suffered in my life were related to the condition.

Okay, then, let’s see what went on yesterday…

I’ve read Night Owl’s blog faithfully for quite some time; in fact, he was one of the first bloggers I read when I discovered that baseball card blogs existed. So it was quite natural that I wanted to trade with him at some point, I just hadn’t figured out what I had that he might want. When I saw that he had received a Devin Thomas swatch card from a care package and was offering it for trade, I knew what had to be done.

I received his cards in the mail yesterday, and let me tell you: there were a lot. Thankfully, I needed about 80% of what he sent me, so he hit a real sweet spot with me. But due to the sheer quantity, I’ll have to only showcase a relatively few cards and hit the others when I get to their respective slots.

So let’s split them up. First, the vintage!

Tim Foli’s glasses are amazing. I really need to post about him sometime.

Should have seen a 75 coming!

And somewhere in between the vintage and modern stuff lies a zone…we call this zone The Ultimate Mustache Zone.

Look at that thing!

Now, on to the second group: players for whom I had never owned a card.

No idea how Matthew slipped by, but here he is.

Steven was one of those prospects I always meant to get and just never got around to. Now I have him!

Montz is another Matthew LeCroy. Just slipped through the cracks.

Hell, I’d never even heard of this guy, let alone owning one of his cards!

I think this is one of only two major league cards Stammen has, so I’m not down on myself for not having him.

Okay, that’s that for the “new guys”. Last, I’ll just take a look at a couple of cards that I liked. 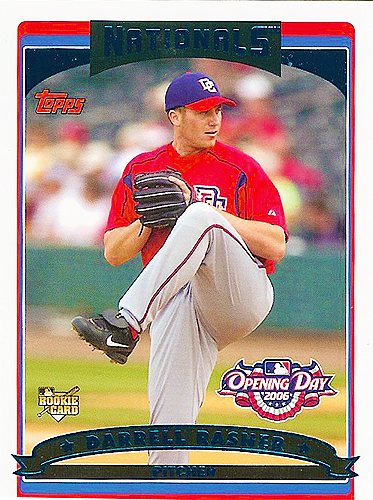 This one flat-out shocked me. I had no idea there were cards with Rasner in a Nationals uniform, and he wasn’t in the main 2006 Topps set. Nice get!

Always grateful for some Turkey Red.

All in all, an awesome trade! Your cards are in the mail, Night Owl! Thanks again.

Just had a chat with Topps_Support on Twitter and they were able to look into things and see that it’s going to take a little more time to ship. My concern was my order had floated out into the ether. Had to update in the interest of fairness. Thanks, Topps! 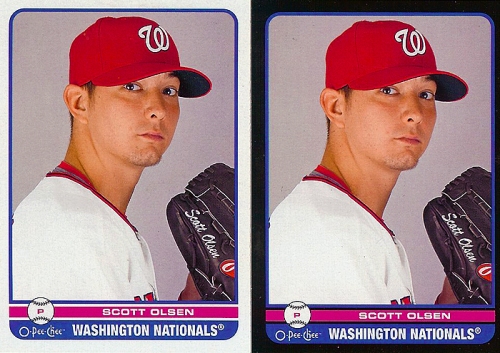 Ugh, I cannot stand Scott Olsen. So ready for this guy to be off of the team. I think that time may be coming soon, though. The question is whether someone will pick him up and give him a chance. 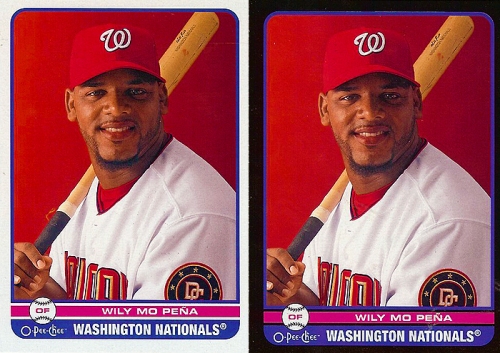 Another former National. I hoped Wily Mo would finally put it together here, but obviously, no. Alas. In fact, it seems his career is over, as he hasn’t picked up anywhere in 2010. Poor guy. Lost potential.

And yet another ex-Nat! I always liked Saul when he came out of the bullpen, and he’s done okay with the Indians so far this year. I hope he hangs in there.

I didn’t even remember Steven Shell. This card perplexed me when I found it. Apparently he was an Angels farmhand in the early 00s, but made his debut with the Nationals in 08, pitching pretty well. He had a 5.40 ERA in 09, and is with the Mariners this season. No great loss, I guess.

At the nats game

Facing the Mets. So far not so great…zimmermann gave up two runs in the top of the first. Here’s a shot of Nyjer Morgan popping out.