I Was a Teenage Prospector: Andy Benes

Topps’ 1989 cards introduced me to the Draft Pick system. I was absolutely mesmerized when I pulled cards like this. I seem to remember Jim Abbott, Steve Avery, Monty Farriss, Bill Bene, Robin Ventura, and Mark Lewis joining Benes in the cards in this set (oh yes, and Ty Griffin and Willie Ansley – can’t forget those flops). They were in different uniforms – they looked a lot younger than your average star, and there was this sense of promise about them. This was a little before the Gregg Jefferies incident (which I will detail soon, very soon), so I can’t point the finger at that for my fascination with younger players. I really think it was the break in formula in the base set that did it. Seeing those cheap little uniforms fired my imagination.

Once I learned about the draft, I was completely hooked. It was like gambling on the future. How awesome was that?

As for Benes – I don’t know, he may have arguably been the best of the bunch. Avery would have overtaken him if not for overuse, and it’s debatable about his career versus Robin Ventura, but I’d take Benes over Ventura when building a team. And yet I had a lot more Ventura cards. Intriguing…

Filed under I Was a Teenage Prospector, San Diego Padres

I Was a Teenage Prospector: Juan Guzman 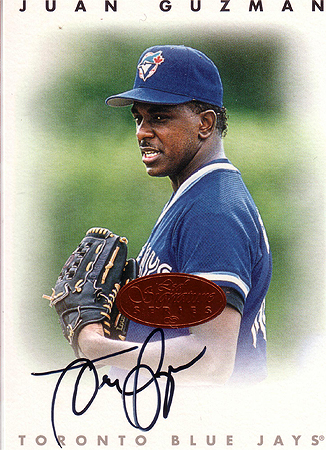 Juan Guzman was one of the first baseball players that I ever saw up-close-and-personal-like. I guess it was summer of 1994, and a friend had somehow scored AMAZING tickets, right down the first base line, behind the first base dugout at Camden Yards, and like three rows up. I’ve never been so close to a game, and it spoiled me for years afterward. Anyway, I kind of remember Guzman coming over and signing autographs, but I DEFINITELY remember watching him warm up so close to us. I was amazed at how close the mound was to home plate. It seems a whole lot closer when you’ve got some flamethrower out there, let me tell you.

It took a lot of digging, and I thought it had gone down before the year of my high school graduation, but apparently not – July 31st, 1994, was the first time Guzman pitched at Camden. He didn’t exactly pitch a gem, but he got the win against a decent Baltimore lineup. Looking at that lineup, I feel pretty honored to have seen some of those guys: Devon White, Robbie Alomar, Paul Molitor, and John Olerud (my second time seeing my hero in action). Not to mention, of COURSE, Cal Ripken, Harold Baines, and Rafael Palmeiro, who I liked a lot at the time.

I also remember this game as a big deal for the neighborhood rivalry – Ben McDonald versus John Olerud – the ultimate answer to who was better. The victor? Well…Olerud went 2 for 3 with a homerun and a triple. McDonald? 6 ER in 5 innings. Olerud supremacy!

Filed under I Was a Teenage Prospector, Toronto Blue Jays

State of the Blog

I’m sure you’ve noticed that things have slowed down around here…the thing is, I’m in a big push to get a good chunk of my novel ready for review with a prospective publisher after the first of the year. Combine that with the holidays and amazon sales eating up a chunk of my free time and I just don’t have enough time to dedicate to the blog at the moment. My hope is to start up again regularly after the first of the year, but we’ll see how that goes; I’ve wanted to be a novelist since I was 11, and now that I have a real chance at doing it, I need to seize it. Priorities, you know?

In the meantime, I hope that everyone has an awesome holiday season and I see you again in the new year!

I Was a Teenage Prospector: Ryan Klesko

In 1990, I was absolutely obsessed with John Olerud. I had been interested in the guy since learning that he was a legit two-way threat, a batter who could also pitch well (I was enthralled with the Babe Ruth legend at the time). Around that time, I started hearing about recent draftee Ryan Klesko, another two-way threat, though it’s hard to believe these days. Let me tell you, though, that was all I needed to hear, and he was on my want list. Of course, I had some trouble finding Klesko cards, as he wasn’t in any of the major sets. Thankfully, the 1990 minor league sets took off, and next thing you know, I have a bunch of Klesko cards.

Of course, we know how his career turned out: okay, passable, but never a real superstar, which bummed me out. I was convinced that somehow he would be the next great thing. I’m sure the warning signs were there: lack of plate discipline, high strikeout-to-walk ratio, the whole deal, but then…well, it was just as much about the legend of the player as the reality. And Klesko was quite a legend for me in the summers of 90 and 91.

Filed under Atlanta Braves, I Was a Teenage Prospector

I Was a Teenage Prospector: Dave Hollins

Dave Hollins was one of those prospects that came out of nowhere for me and did a lot better than by all rights he should have. I only learned about the Rule V Draft in 1990, and Hollins was my entree into this confusing world, and after watching him play some, I scooped up as his cards as soon as I could, which was not soon enough. I believe my first Hollins card came in the 1990 Fleer Update set, but based off of Ken Griffey Jr‘s rookie card, Upper Deck was considered THE rookie card to have (Leaf would steal that crown soon enough).

Hollins is also one of those players whom I would love to see in their original uniform, one of those “almost” cards like the Ryne Sandberg Phillies cards that have popped up over the years. I wouldn’t say I’d give anything to see Hollins in a Padres uniform, but I think it would be pretty cool, especially since the Pads’ uniforms at the time were so great.

Careerwise, Hollins didn’t turn out to be anything special. I mean, sure, he had some great years, but overall he was just above average in OPS+, which means he was below average for a third baseman. Guess I didn’t miss out on much not getting his Leaf card after all.

Filed under I Was a Teenage Prospector, Philadelphia Phillies

I Was a Teenage Prospector: Brent Knackert 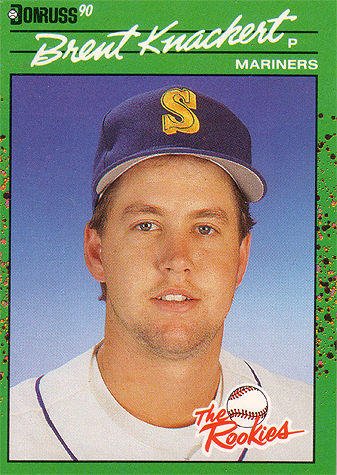 I’m covering Marquis Grissom’s 1990 Rookies issue on my other site this morning, and it seemed fitting to look at one of the more obscure prospects from that set on this site today. Knackert was not the best prospect, but what he represents is a branching out. He had an okay if not stellar minor league reputation with the White Sox before getting picked up by the Mets as a Rule V draftee. I guess he failed to make the squad and the Mariners picked him up off waivers, deciding to give him a shot at staying on the roster that year, and what an abysmal year it was. I mean, the guy was 21, but he had a 61 ERA+. My branching-out prospecting brain, however, seized on his age rather than his ability and thought he had staying power. Yeah, he didn’t. He made it to the majors again in 1996, then he was done. I still had a lot to learn.

But what really brings me back on this card is that Mariners cap. I loved that logo, for some reason. I guess it was the yellow on blue…it had such a classic 80s feel, yet I didn’t know what that even meant at the time. All I knew was that I had to have one, being a big uniform and cap sucker. I wore that thing with pride for a few years until it was too worn out to carry on, along with my two Blue Jays hats with that classic, awesome logo that made me a Jays fan for so many years.  You know the one.

Filed under I Was a Teenage Prospector, Seattle Mariners 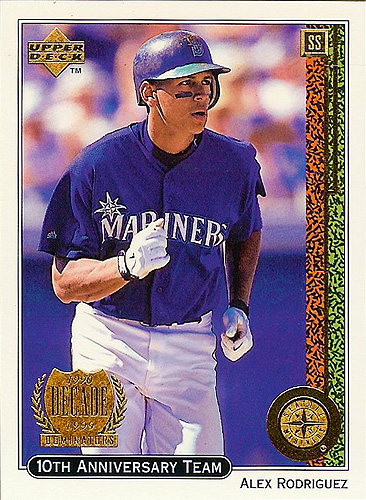 As much of a weirdo as A-Rod is, and as much as I hate the Yankees, I have to respect what he’s done. I just have to. 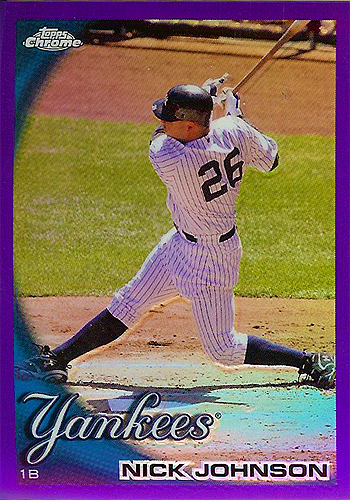 Oh, Nick. I wish your career would have turned out better. If only you weren’t made out of glass.