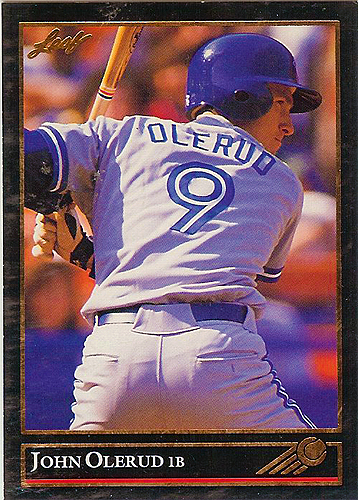 Okay, on we go. Do you know how badly I wished that Black Gold design would be the real Leaf design? I think the history of Leaf might have gone very differently if they had gone with that design as the base. Or a world where they jump from the 1990 design straight to the black border design. I know lots of people either don’t like gold leaf or are sick to death of it, but I like it when it’s used correctly, and I feel this is the correct application. Now, as for the card itself, I would’ve preferred a better shot than his back, but I guess it’s interesting, especially in the context of the numerous fielding cards we’ve seen so far. 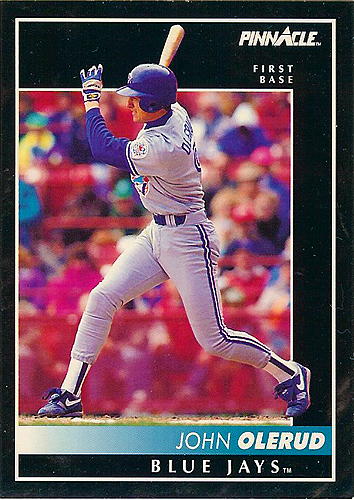 I’m so torn on this set. I really like the design, the black borders, the coloring…but there’s something that always made the set feel “cheap” to me, and I can’t put my finger on it. I suspect it’s because it’s a throwback to a little different school of design, where the design is the centerpiece and the photograph plays second fiddle. I just can’t help but wonder what that picture would look like if it was allowed to fill that entire black space to the upper right-hand corner. Although it is another average picture. Ho-hum. 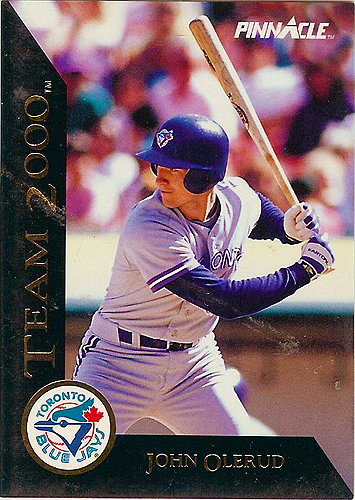 Now THAT is what I’m talking about. Why couldn’t they have made the Pinnacle design look like that? I love it; the design elements are neatly placed on the left-hand side, with a full-bleed to the top and right of the card. The photograph becomes of far more importance, and you get the nice black borders with gold leaf. It’s a win-win decision. I like this card so much I’ve purposefully bought multiple copies with an eye toward filling a page with them. I may try to put the set together one day; watch this space.

You know, I had never made the connection between the 92 Score and Pinnacle designs, but they have a lot in common. You have the design elements taking up 3/4″ of the card, to the point where they become the main focus rather than the photo. The lines are similar, from the lines at the bottom to the top. Hell, the photo on this card is even similar. Obviously, the colors are different, but it does make me wonder if the same guy who designed this designed Pinnacle that year.

And here we have an example of what I like about the Team 2000 card all over again. Design elements are relegated to the lower left corner (though lifted a bit off of the picture, allowing for the photo to bleed to that edge), leaving the rest of the card for the photo. And it’s actually a well-constructed photo. This card is a darkhorse favorite of the early 90s for me, and I’d never put together why until I saw it side-by-side with the Team 2000 card. Again, same designer? We may never know.