This time, let’s wander a bit afield of the 80s and even the early 90s as we start to get into the incredible mid-90s Expos teams and a pretty cool little set, 1994 Bowman’s Best.

Of course, as with all chrome/refractors, scanning is a bit of a tricky process, so I’ve done the best I can to clean up these scans.

There are two designs in the set, this red for veterans and “super rookies” (whatever those are) and blue for prospects. The design is very…odd, I’ll give you that, with lots of jagged angles and conflicting textures, but I like the artiness of it all. 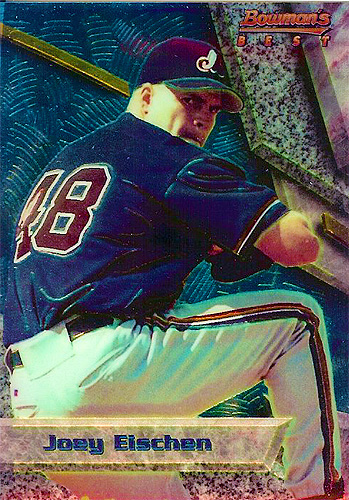 It was so weird to open this set and see Eischen as a prospect. It’s hard to believe there may have been a time that was true, given how long he hung on with the club. Nice little nod to the guy.

See, here’s what I mean about the super rookie designation. Floyd should have technically gotten a blue card here, but they went with that. I don’t know, I think I would have preferred the blue.

The player choices for this set were a little odd, I have to say. We’ll see more of that when I present part 2 tomorrow. They covered most of the key players, I suppose, but there are a couple of glaring omissions. Still, I’m glad to have the set; I always kind of admired it from afar. 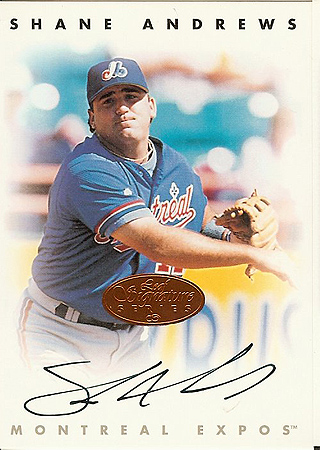 So, I was wondering…just how good of a prospect was Shane Andrews? Not that great, honestly. If you look at the average of his years leading up to his ML debut, he had a .239/.360/.426 line. I’m a bit surprised, honestly. I thought the slugging would be higher and the obp way lower. Now, about his strikeout totals, which I remember being the big rap on him….well, on the surface, a legit concern, but when you dig deeper, he averaged about 138 whiffs per season in an average of 514 PAs, or about one K every .27 PAs. I don’t know about you, but with that OBP, that’s an acceptable risk.

So…Shane Andrews…a proto Jack Cust? It would seem that way. Too bad his major league career didn’t quite work out that way.

Okay, so this isn’t the first time I’ve featured Mr. Andrews on this site, but I wanted to go through his cards from my collection: 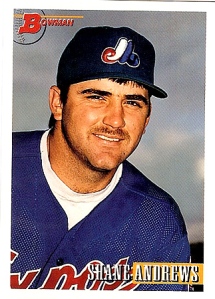 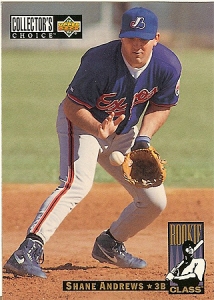 1990, and the rookie game was on in the hobby. I was a budding prospector with a mother who was hooked on QVC. At the time, the network had a show that focused on sports memorabilia, especially focusing on overpriced offers for the old Classic games. I wasn’t interested at all – if it wasn’t Donruss, Fleer, Score, or Upper Deck, forget it. That is, until they showed up with this set. Draft picks? You mean a set made ENTIRELY of prospects? AND it’s a limited edition (a number that’s absolutely laughable these days)? I begged my mom. I pleaded. I cajoled.
And then I waited what seemed an eternity for the set to arrive in the mail. For some reason, as a kid, it seemed the mail moved SO much slower, but I guess that’s because the days felt so much longer. These days I’m surprised when something shows up so quickly and it wasn’t really that fast at all. And man – it came in a snap case! With the little number printed right on it! I felt like baseball royalty in my neighborhood, since no one else had bothered or known. Chipper Jones? Check. Todd Van Poppel? Check. This weird looking guy who I’d never heard of? Oh yeah.
The other kids were jealous, even if they didn’t know it.

Shane Andrews
1995 Upper Deck Minors #136
Position: 3B
Bio/Summary: Man, here’s a tough one to call a failed prospect. Can you really call a guy who hit 25 homers at the major league level a failed prospect? I posit that you can, if his career numbers are 220/298/421. A .298 career OBP! That’s insane…he’s not even a Three True Outcomes guy, more like a Two True Outcomes: whiff or homer. It sucks because I had hope for this caveman-looking dude when I first encountered him in the 1990 Classic Draft pick set (I really need to dig up Rondell White and Andrews from that set).
How Did I Get It?: Opened a box of 1995 Upper Deck Minors in 2004.
Did You Know?: Shane actually played for a team called the Cavemen in high school; he was their shortstop.
Rating: 7/10 – I’ve talked about my love for the 1995 minors set, and the black borders go so well with the black uniforms here. Wish I could figure out who’s on his left, though. Not enough clues.