I Was a Teenage Prospector: Derek Bell 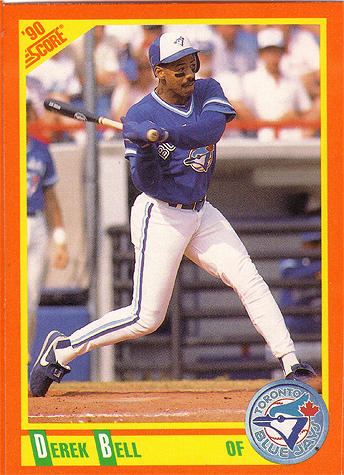 I covered Delino Deshields’ 1988 O-Pee-Chee card on my other site today, and as much as I’d love to write about Derek’s here, I think it’s better to offer some variety, so it is that we behold Derek’s 1990 Score Traded, his first mainstream card. Derek was one of the prospects that I first learned about in 1988, with his name mentioned in the same breath as Joey Belle when it came to being troubled. As a burgeoning Blue Jays collector, I was intrigued, especially by the Eric Davis comparisons that were being drawn; I was also really into Davis at the time.

Of course, finding the OPC card sent me over the moon, but I had to endure a few years’ wait after that for another Derek Bell card. It was an incredibly pleasant surprise to pick up the 1990 Score Traded set at a small coin shop in my hometown in 1990 (a coin shop that was the go-to-source for traded sets). 1990 Score had such a cool design, and though I was disappointed with the color scheme, I treasured all the random rookie cards in the set, including this Bell card.

This was also my first exposure to the conundrum of XRCs. I was confused at the time. Did the OPC card count as his rookie, or did this? Or would his 1991 cards count as rookies with both of these as oddities? I’m dismayed that this answer is just as, if not more, confusing than ever these days. I thought for sure it would eventually be answered. It makes me glad I got out of this rookie business.

Filed under I Was a Teenage Prospector, Toronto Blue Jays