Just learned of the existence of the Luis Aparicio award, given to the best Venezuelan player in the majors as voted on by the Venezuelan sports writers. Carlos Gonzalez of the Rockies won it this year.

Chose this one because I had forgotten Matt Diaz started as a Rays prospect. Love these weird out-of-place cards.

Nook was a pretty awful outfielder for the Nationals, but back in 03 it looked like he might have been decent. Thanks for the fun times, though, Nook.

No idea if that swatch is from an Expos jersey…I kind of doubt it, but I still love this card anyway. There just aren’t enough cards of Randy Johnson in an Expos jersey, and this is a shot I’d never seen before. I guess that swatch cut-out is supposed to be shaped like a trophy, but it’s pretty poorly done. Still, all in all, a totally worthy addition to the collection.

It’s been awhile since I’ve posted about old Johnny O; I’m still in the process of scanning his 1993 cards, so I thought in the meantime I’d show some of the game-used Olerud that I already have.

One of my absolute favorite Olerud cards. I believe it’s numbered to 50. These sets looked horrid when you got the base version, but something like this just looks great, and I got it for insanely cheap. I felt like I ripped someone off, honestly.

This card is a lot cooler than it looks. It’s made of an almost translucent material, and you can touch the jersey from both the front and the back. Another favorite.

I have a LOT more of these, I just don’t have them scanned. Look for more soon.

I think I’m going to start covering some of my favorite cards from my collection, beginning with this gem:

Believe it or not, I pulled this from a pack in a repack box. I seem to have great luck with those things, but this was certainly what I consider my greatest pull, even if the Mike Stanton might have been worth more money. Game-used may be passe these days, but pulling a piece of bat that is, at a minimum, almost 100 years old, feels pretty damn special. I’ve been tempted to unload this card over the years since I pulled it, but I could never bring myself to do it. It’s a *real* piece of baseball history, and that’s what makes it one of my favorite cards.

Filed under My Favorite Cards

Okay, so we’re back for da sequel! A reminder of the rules:

On with the show… 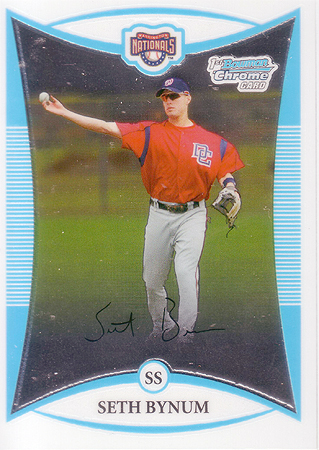 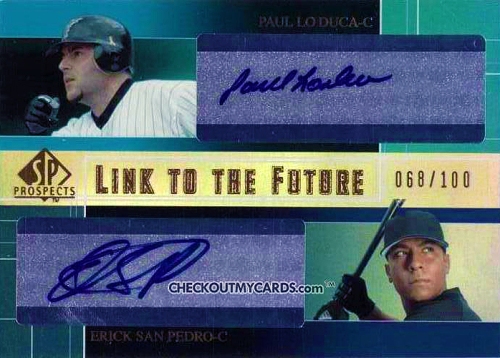 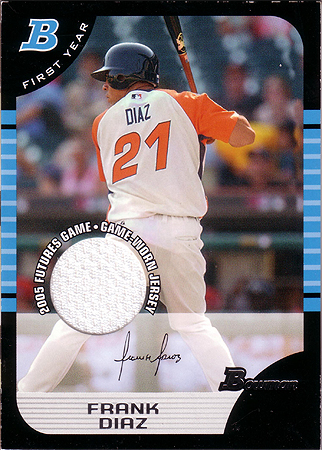 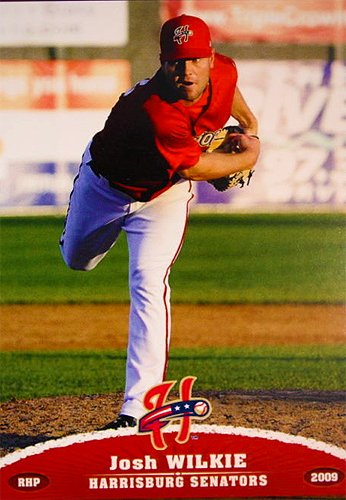 Wow, I did not expect Mike Hinckley to be the star of this team. Maybe the guy will live in the majors yet.

Next we’ll compare these two teams head-to-head. Looking at career ML WAR isn’t really fair, since a lot of these guys are younger and haven’t had a chance to make it. I have a different plan. 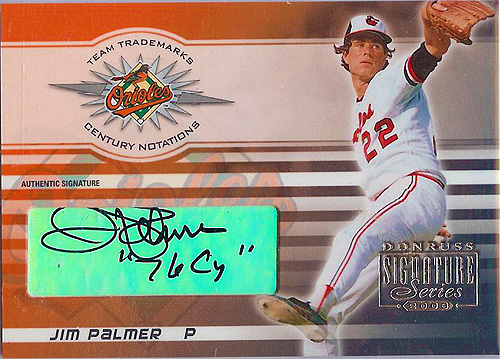 Absolutely one of my favorite cards in my collection. I’m a Jim Palmer collector to begin with, and finding a card with a signature referencing the Cy Young Palmer won in my birth year was…yeah. I won this in an auction back in 2005, and had debated for quite some time during my last run on whether I would feature it on the blog. In the end, I had to go for it, and haven’t regretted it since. What a great card, even if it is a cut sticker.

This is an idea that’s been kicking around in the back of my head for awhile, and, as I’ve now reached the 500th post, I thought it was time to do something special.

My plan is to separate the two eras, as it wasn’t fair to either team to lump them together. Entry 1 is the Expos; Entry 2 the Nationals; Entry 3 a Battle Royale determining who is the “better” (worse) failed prospect. When that’s done, I’m going to try to acquire some of these key rookie cards that I don’t already have. 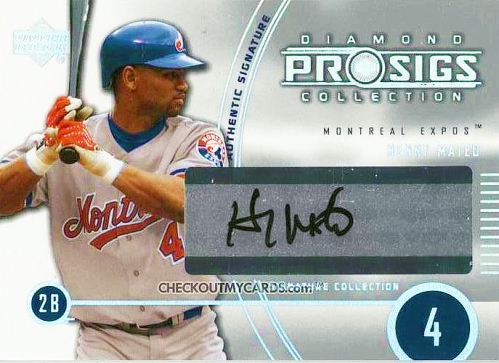 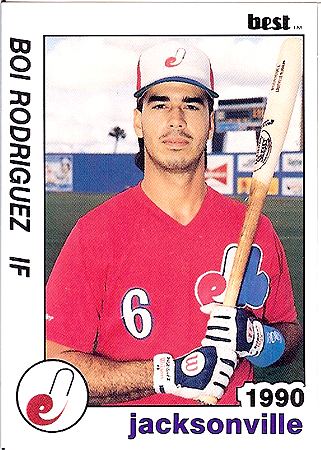 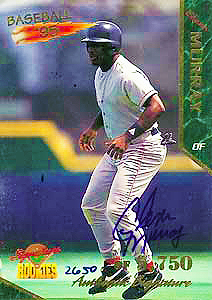 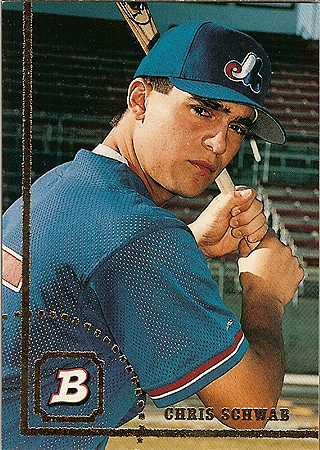 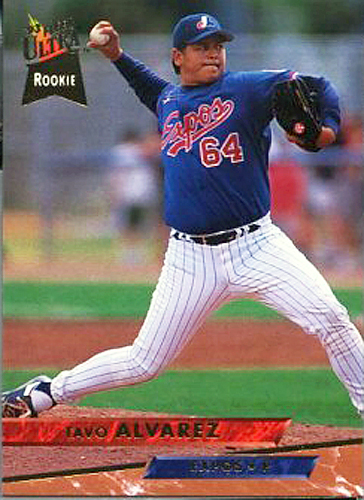 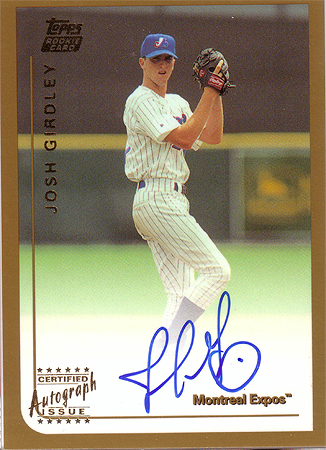 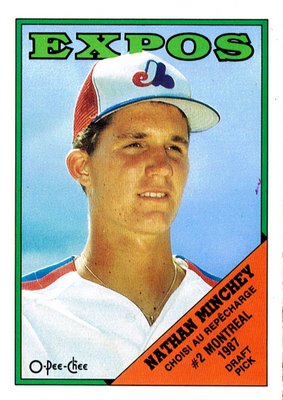 That’s right, Nelson Santovenia is the MVP of this sad squad. We’ll look at the Nationals soon.

Okay, technically this is a card of a Yankee, but it was too sweet to pass up, and I’ll always like Nick, even if he’s made of glass. 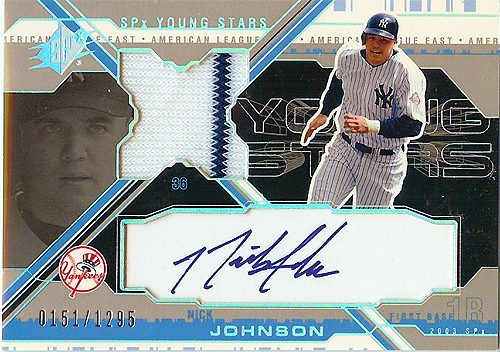 Absolutely one of my favorite cards in my collection. Sure, the design is busy as hell, but oddly enough I feel like it works, especially with the striped uniform piece, which fits in with all the lines and angles. I think a plain white swatch would have ruined the look. It’s a nice cut sig, as well. Definitely gets an A+ in my book, and I’m going to hold on to it for a long time.